A Decade into the European Refugees Crisis: Movie Screening & Talk with Mauro Mondello 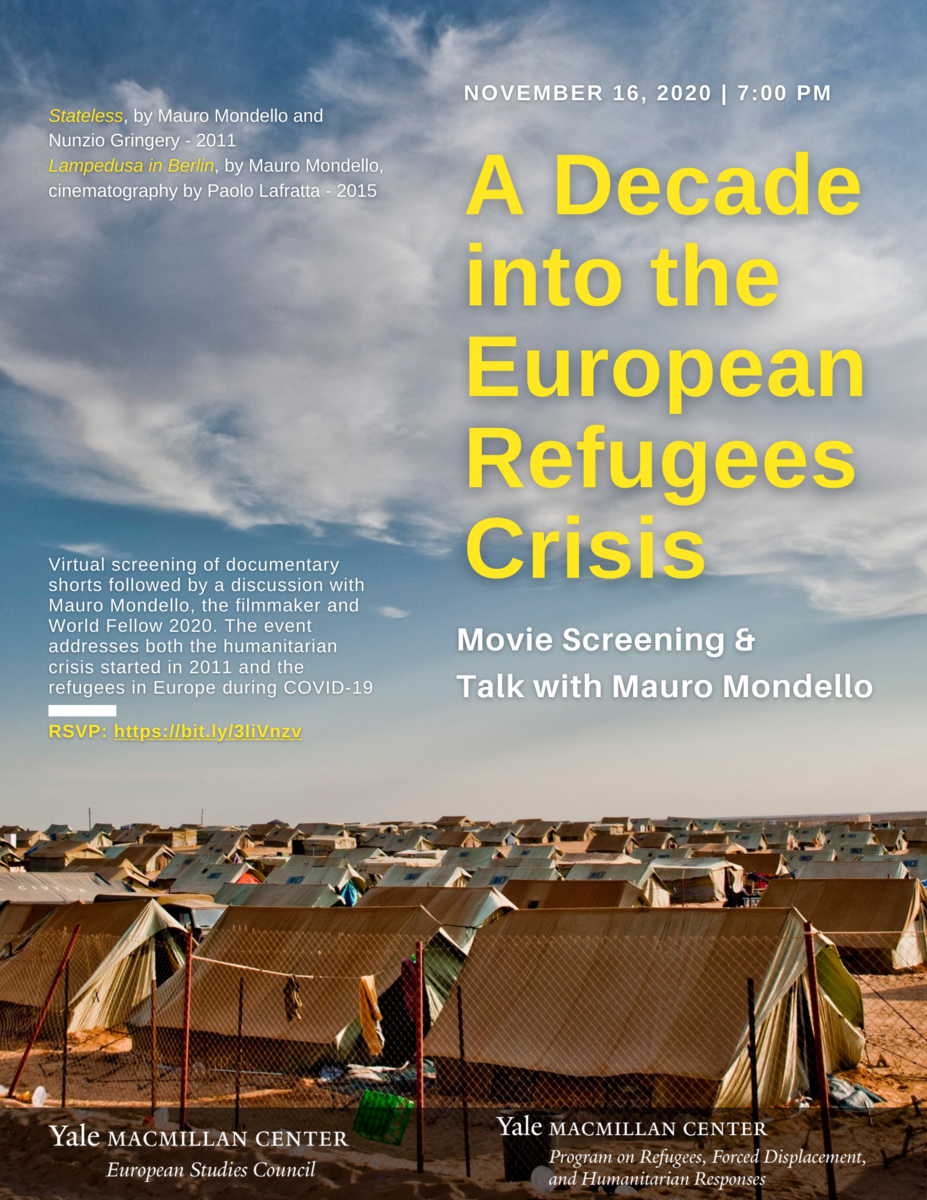 The European Studies Council, the Program on Refugees, Forced Displacement, and Humanitarian Responses, and Mauro Mondello, World Fellow 2020; Reporter, Freelance Journalist present a screening of documentary shorts and a discussion addressing both the humanitarian crisis started in 2011 and the refugees in Europe during COVID-19. Please register in advance for the zoom webinar link: https://yale.zoom.us/webinar/register/WN_B06VVaf7SWa56Oc_q0DF9w Stateless, by Mauro Mondello and Nunzio Gringery - 2011 Lampedusa in Berlin, by Mauro Mondello, cinematography by Paolo Lafratta - 2015 Among many other crises around the world, the European Refugees Crisis, which started in 2011 as a consequence of the Libyan and Syrian wars, is, still today, the most impactful for Europe. Namely, from security to economic or from political to geostrategic, its impacts on Europe are multifaceted. The migration dimension is, however, the most significant one. In addition to its crucial humanitarian extent, it is a source of dissent, contention and competition among the different EU Member States. Discussions around irregular migration have been threatening the solidarity and damaging the reputation of the EU. Together with the rapidly changing regional and global dynamics, the conditions of EU aspiring refugees/migrants has been worsening. Since the beginning of 2020, besides, COVID-19 and connected anti-migration policies of the EU Member States had severe impacts on the conditions of refugees/irregular migrants which are shadowed by the dazzling developments in other fields. Mauro Mondello is a World Fellow 2020, a freelance reporter, war correspondent, documentary filmmaker and the co-founder of Yanez, an online long-form journalism magazine. Often focusing on human rights and freedoms, his reporting strives to garner dignity and respect for all cultures and religions and to foster an open society that provides shelter for refugees and space for all humanity. He began his journalism career as a staff journalist in Italy and was based in South America between 2008 and 2011. He then moved to Tunis to report on the Arab Spring uprisings in Tunisia, Libya, and Egypt. From 2013 to 2019, he was based in Berlin, Germany. Mauro's current work reports on a variety of issues, including refugees, migration, human rights, EU foreign policy, civil movements, mafia and Italian criminality, nuclear waste and climate change. His documentaries include “Lampedusa in Berlin,” a report about the eviction of migrants in Berlin, filmed in 2015.
+ Google Calendar+ iCal Export
Registration Info