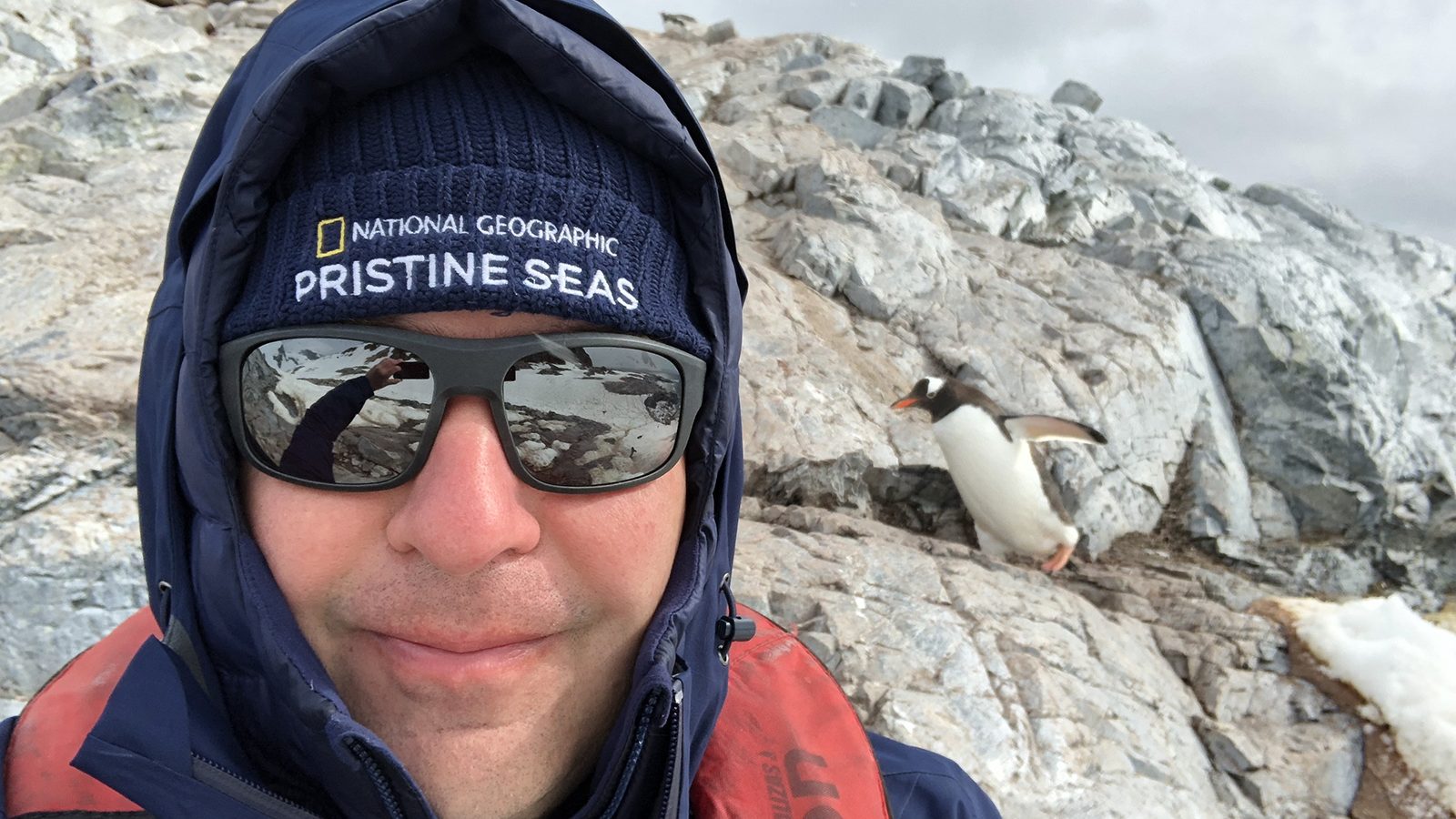 In March 2020, you returned from a three-week National Geographic expedition to the Patagonian fjords in Chile. That sounds amazing. What were some of the most interesting things that you saw or learned during the trip?

The first thing that you realize is that you are in a unique place. And one of the last wild places that is left in the world. Our civilization and humanity have gone to virtually all the corners of the world, but still there are some untouched places. And it’s a real privilege to be in one of them and to realize what nature is like without intervention. You see a perfect ecosystem that is not only clean, but it’s full of life. You realize that nature is about relationships. It’s about how everybody needs each other to survive. And it became clear because down in the kelp forest, everything was so condensed that you can actually see those interactions.

Another important thing was that this is a territory where some indigenous people have been living for over 6,000 years. We invited leaders from two indigenous peoples in Chile—the Kawésqar people and the Yagan people—to be on the boat with us during the whole trip. And we could share our own science with their traditional knowledge to understand the importance of this territory from those two perspectives. For the first time, this was not just a scientific expedition, but it was actually a scientific and cultural expedition. And what it was really exciting is that some of the things that our scientists found mirrored what the indigenous people already knew. For example, how some of the places that were closer to the glaciers that hosted some species were different from the ones that are closer to the Pacific Ocean, with different salinity and temperature and host completely different species. The indigenous peoples already knew that. And they had different words and concepts to describe the same phenomenon. So, it was a much richer expedition when we incorporate all this traditional knowledge. We have to protect these places, together with the indigenous peoples and local communities.

You also had the opportunity, in 2019, to travel to a place few people will ever go: Antarctica. Besides the adorable penguins, what are the top three things people should know about this part the world?

Well, going to Antarctica is the closest thing to going to the moon—it’s a completely different experience. First, it’s the only continent without borders, you can tell that from the beginning. It’s a place that is everyone’s territory. Although you can see scientific stations from different countries, there’s an environment of collaboration. That’s the only way to survive there. And you can see that they share not only knowledge, but they take care with each other. And if somebody is going through an emergency, everybody will look after the other ones so they can survive. So the mentality is kind of the one that I think that can save the world. If you think about a world that is going through multiple crises like climate change or the loss of biodiversity, the only way that we can save ourselves is by collaborating and by creating a feeling that we’re all in the same boat. And in Antarctica, they have been living like that for decades and they feel that they’re part of one single continent. They have to collaborate with each other if they want to survive and move forward. And that’s a very strong message that Antarctica can give to the world.

The other thing is that although it’s one of the coldest places on Earth, it’s full of life. You see whales jumping every few minutes, thousands of penguins happily walking around and not fearing humans when they approach. You also see birds and seals. And also a little organism called krill, a little crustacean that is very abundant in Antarctica that is the basis of all the life there. In Antarctica either everything eats krill or eats something that eats krill. So, there’s a huge interdependence between the big fauna and these little creatures that are the basis of the food chain for all these species.

It’s great that there are many countries in the world trying to protect this place and that also speaks to the need for international cooperation. There are 25 countries that have the authority to decide on Antarctica—they have the power to create or reject marine protected areas. We are in the process of convincing all of them to protect the Antarctic Peninsula. We are supporting a proposal by Chile and Argentina together. That’s why this was a binational expedition, officially supported by both governments and with scientists from both nations. I’m glad that this has become a focus of interest because we have a lot of immediate or very tangible problems in our lives. But if we don’t fix the ones that are more remote but are equally important, we will be putting our future at risk. Fixing climate change, protecting the last wild places are also contributing to mitigating climate change, having more food security, protecting biodiversity—those things are very important. And unfortunately, they are not on the top of the news most of the time because they’re not that tangible. But that’s why we need leaders that can see those problems and make them a priority.

That’s a good segue into my next question, which is about climate change. During your time at Yale, you organized a strike to bring greater awareness to the issue of climate change. For many scientists across the globe, this is the absolute highest priority. What will it take to bring this issue to the forefront for everyone else (policymakers, the general public, etc.)?

It’s clear that climate change is as dangerous as COVID-19 but it just moves slowly and silently. That’s why it’s important that we change the narrative, so people understand that this is problem is a severe risk to our future. We have to tell a story that makes more tangible the impacts of climate change in own daily life. When you think about climate change, people see it as very far away or nothing that will happen in our lifetime. But climate change, for instance, can make all the climate phenomenon be more extreme like droughts or hurricanes. There are many people that will have to leave their homes because of lack of water or heat waves, for example. Just think about having to leave your town because it’s not livable anymore. That’s very tangible. So, we’re already seeing that and it will become more visible in the future. And I’m afraid that climate change can even be more dangerous and kill more people, displace more people than the sanitary crisis that we’re going through right now.

It’s our responsibility to tell that story better and make it not just a scientific debate, but actually a very domestic debate that we should be all talking about, making sure that we do our part. And that means changing to some extent our lifestyles, but also demanding our elected officials make different policies. I want to believe that in the next elections, everybody will be asking about environmental policies to the candidates. That is super important. This is not a side issue, that’s not something that is futuristic or science fiction.

Fixing the problem of climate change is way more expensive than preventing it. The things that we can do now can be somehow difficult or burdensome. But it’s so much cheaper and easier than fixing when the problem is already there. If we exceed the 1.5 degree increase in temperature in the world, it’s very difficult to turn that back. It’s very difficult to fix that. I think we should make the rational decision of changing our policies and our economy now instead of just trying to cure something that when it when it’s already late and it will probably triple the cost of having adopted measures now.

You participated in the World Fellows program in Fall 2019. With that experience now in the rearview mirror, what are your most important takeaways from it?

For me, it was a life-changing and especially a mind-changing experience. It gives a much more global perspective on certain problems that before you think affect only your country or your own reality, but then you realize that there’s so much in common between different countries, even with the ones that you thought there were so different. And also, you realize that there are some countries that are having much harder times than you are. So, it’s a program that gives you a different lens to look at these problems that are more common or global than you think.

It helps you build a sense of community. When you share with the other fellows, you start thinking collectively. You share the responsibility of thinking for everybody and not just for yourself, which I think is the key to solving the world’s problems. Collaboration is the only way we can tackle all these huge problems. There’s no way that we can address those all by yourself. You have to get together with people that think differently or come with from different backgrounds. And the World Fellows Program really is like a rehearsal for real life, where we may be in a position to help fix these huge problems.

The World Fellows Program really shows you how good relationships can change an outcome of your work. We really became inseparable with the other fellows. And I mean this not in a professional way, but in a friendship sense of the term. We care about each other and we appreciate each other on a personal level, and that really can move mountains. When you care about people, you can really run miles for them if they need you. And if you think about it, when you care about people, the decisions are different. You can apply that to any government or company or any professional experience. When you start seeing the others and appreciating their differences, their contribution to your own life, you are able to do so much more for them. So, you learn that caring about each other and cultivating those personal relationships can actually make a huge difference in your work and your own life.

The outbreak of the COVID-19 pandemic took many countries off-guard, resulting in lockdowns and travel restrictions. As someone who travels the world for a living, what has that been like for you personally?

It’s great to take a break from airports. But it also teaches us to be humble about things that you cannot control. I miss traveling and I also miss visiting other people. We’re so used to getting together with people from different countries, all the time. My work is based on meeting people and now I just cannot do that except remotely. But we have to be humble and accept that this is bigger than us individually.

Instead of thinking that this is a problem, I think that we have to realize that this is actually a message that nature is giving us for us to change certain things. So, if we want our lives back, it will require some changes from us individually and collectively. So as difficult as this has been, I’m looking at this in a very optimistic way because I think we will finally have a window of opportunity to make drastic changes that were necessary a long time ago. But we were not listening.