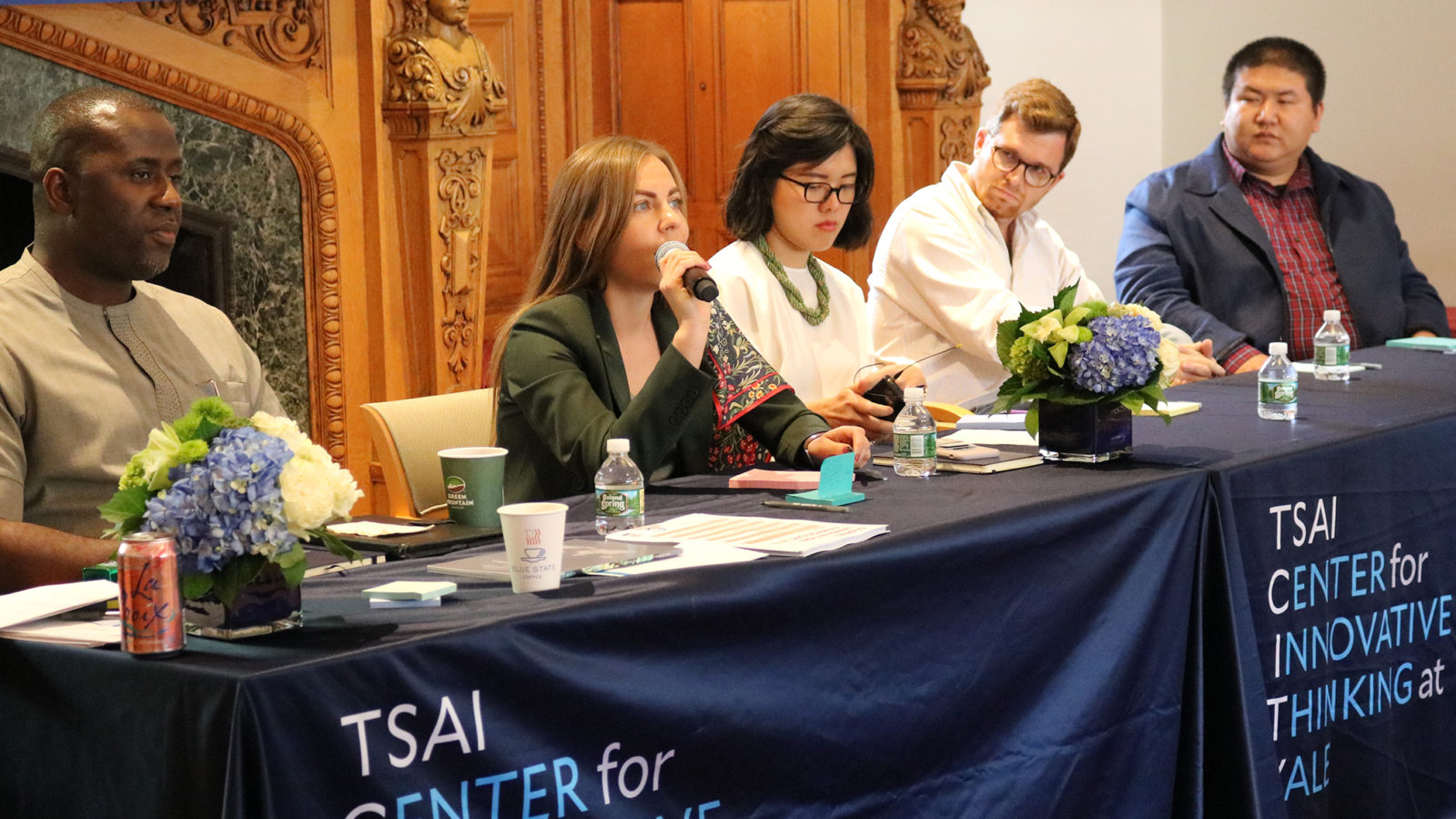 “I think of innovation as shifts in perspective….there’s not just one way to innovate. Innovation comes out of all disciplines.”

Those were part of the remarks delivered by Tsai CITY executive director Clare Leinweber as she opened the Global Innovation Symposium on September 26. The all-day event, a collaboration between the Knowledge Equity Initiative and Yale’s Maurice R. Greenberg World Fellows Program, was spearheaded by Baljeet Sandhu, Tsai CITY Senior Global Innovator and 2017 World Fellow. Building on last year’s successful Global Innovation Series, which brought talks on innovation, leadership and impact to over 400 members of the Yale and New Haven community, the symposium gathered an inspiring lineup of speakers. 2019 Neighbor in Residence Donald McAulay, Jr. joined over a dozen World Fellows — leaders from around the globe — in a series of panels that connected local and global insights.

Over the course of the day, speakers explored innovation in fields from sports to politics, with the common aim of sharing innovative approaches they have deployed to tackle complex societal and environmental challenges around the world. Across the symposium’s diverse topics, a number of shared themes emerged. Here are three that stuck with us.

Learning from the past is a key component of meaningful innovation.

While innovation is often associated with new things — from new ideas to new technologies — panelists argued that applying lessons from the past can also be an essential element of innovation. “Sometimes we need to stop looking forward and looking for fancy solutions, and we need to step back and look at systems that worked,” observed sustainable-living advocate Rebecca Sullivan during a panel on food systems. She shared an experience working with coffee bean farmers in rural Uganda as part of an Engineers Without Borders project. While the team had originally envisioned installing expensive, high-tech dehydrators in the area, they quickly realized that the local method of drying beans in the sun on plastic sheets was just as effective. More broadly, much of Sullivan’s work involves learning from the knowledge and wisdom of elders: through her Granny Skills Movement, she aims to bring together a multicultural community of women to share skills from growing food to making soap — fostering intergenerational connection and knowledge exchange, and preserving precious skills that may otherwise slip away. “If we all lived a bit more like our grandmothers, we’d be in a much better position,” she told the audience.

Throughout the day, this theme came up repeatedly. During an afternoon panel on public policy innovation, Argentine politician and economist Nicolás Massot pointed out that sometimes the most innovative thing we can do is to restore practices that used to work. In an increasingly polarized political landscape, for example, he argued that finding ways back to consensus-building could represent a high-impact innovation in his country.

Panelists also highlighted how learning from the past had shaped the ways in which they viewed and approached their work. In a panel on storytelling and movement building, Syrian-Turkish journalist Onur Burçak Belli shared how she had grown up surrounded by stories and knowledge that were handed down, and how her community had used storytelling as a way of transferring wisdom and values. “Older generations,” she said, “were like living libraries.”

Lived experiences and personal connections can be powerful drivers of innovation.

In the day’s first panel, which focused on sports and leadership, Simidele Adeagbo — a Nigerian Olympian, brand strategist, and advocate — emphasized the power of the stories behind achievements and innovations. “It’s important that people see the work and we make it visible,” she said. “I really try to get the narrative out there, because it’s important.” As the first African and black woman to compete in Skeleton at the Olympics, she is using her platform to share her personal story with others — with a particular focus on building leadership skills among girls. Drawing on her background in marketing at Nike, she also pointed out that brands understand the power of sports and athletes’ journeys to unlock potential in people — and social initiatives can harness this power as well. As the conversation continued, 2019 Neighbor in Residence Donald McAulay, Jr. shared how this approach of combining lived and learned experiences has shaped his academic and innovation practice locally in New Haven.

Panelists from a wide range of fields highlighted the personal element of innovation. Olena Sotnyk, a member of the Ukrainian Parliament, emphasized the importance of truly listening to people’s experiences, observing that her work had been most successful when she came from a place of love and caring. Particularly in politics, she said, this can be surprisingly novel — people are accustomed to being treated poorly by politicians.

Speakers also discussed how cultural identities — and collaborations between people who hold a diversity of identities and lived experiences — can shape innovations. Ecuadorian diplomat Diego Tituaña talked about how people carry their cultural identities with them, and how thoughtful intercultural communication can open opportunities to share knowledge and ideas for innovation. He recounted how the first indigenous mayor of his hometown had actively fostered greater representation on his team. This was innovative, Tituaña explained, not because it was a new approach, but because it was a new application of an idea, shaped by local and personal cultural contexts.

The process is often just as important as the products.

When thinking about notable innovations, we often gravitate towards finished products, whether that means a new app or a campaign that has reached its goal. Many of the symposium’s panelists emphasized that sometimes it’s the process — how work is carried out, rather than just what the output of that work is — that’s the true innovation.

Abdul-Rehman Malik, a 2017 World Fellow who works as a journalist, educator, and organizer, shared his experiences helping lead a project in Indonesia following a period of interreligious violence. The project aimed to promote intercultural dialogue by encouraging local local community leaders to talk and share their lived experiences and journeys of faith, with the goal of bringing communities together. A story has more power than a collection of facts, Malik said, largely because the process of telling a story involves making meaning of our lives and the world around us.

During the day’s final panel, Wanjiru Mukoma, the former executive director of LVCT Health (one of Kenya’s leading implementers of HIV and gender-based violence programs), shared another example of innovations in process. Emphasizing the importance of understanding existing systems, she discussed how health groups had gradually improved access to HIV healthcare for gay men in Kenya — despite discriminatory policies — by working at a local, targeted level. This behind-the-scenes ability to navigate existing constraints, strategically finding ways to improve healthcare over time, represented a key innovation.

Throughout the day, speakers highlighted the critical role of building meaningful inclusivity into organizations’ processes, and the value of different forms of knowledge in creating impact. Former Bogotá Secretary for Social Integration Cristina Veléz Valencia described her work on a project to reclaim outdoor public spaces for children in Colombia. Rather than trying to scale the program by simply replicating the same model in different contexts, the team invited community members to take part in the planning process — generating a wealth of ideas and laying the groundwork for the project’s ultimate success. Her fellow panelist, Nizam Uddin, currently Senior Head of Mosaic and Community Integration at The Prince’s Trust in the UK, described how a seemingly simple process change in London — gathering input and feedback from elderly residents — had illuminated key needs like better access to restrooms, helping guide future city planning.

As the panel concluded and the symposium came to a close, it was Sandhu’s turn to ask for feedback, as she thanked the audience for participating in inspiring conversations alongside panelists and encouraged them to “give the gift of feedback” through a short survey form. With the second iteration of the Global Innovation series complete, informed by the insights of last year’s participants, it was time to reflect and look ahead to where Yale’s global innovation initiative might go next — advancing the conversation and continuously inviting new voices, knowledge, and perspectives to join it.