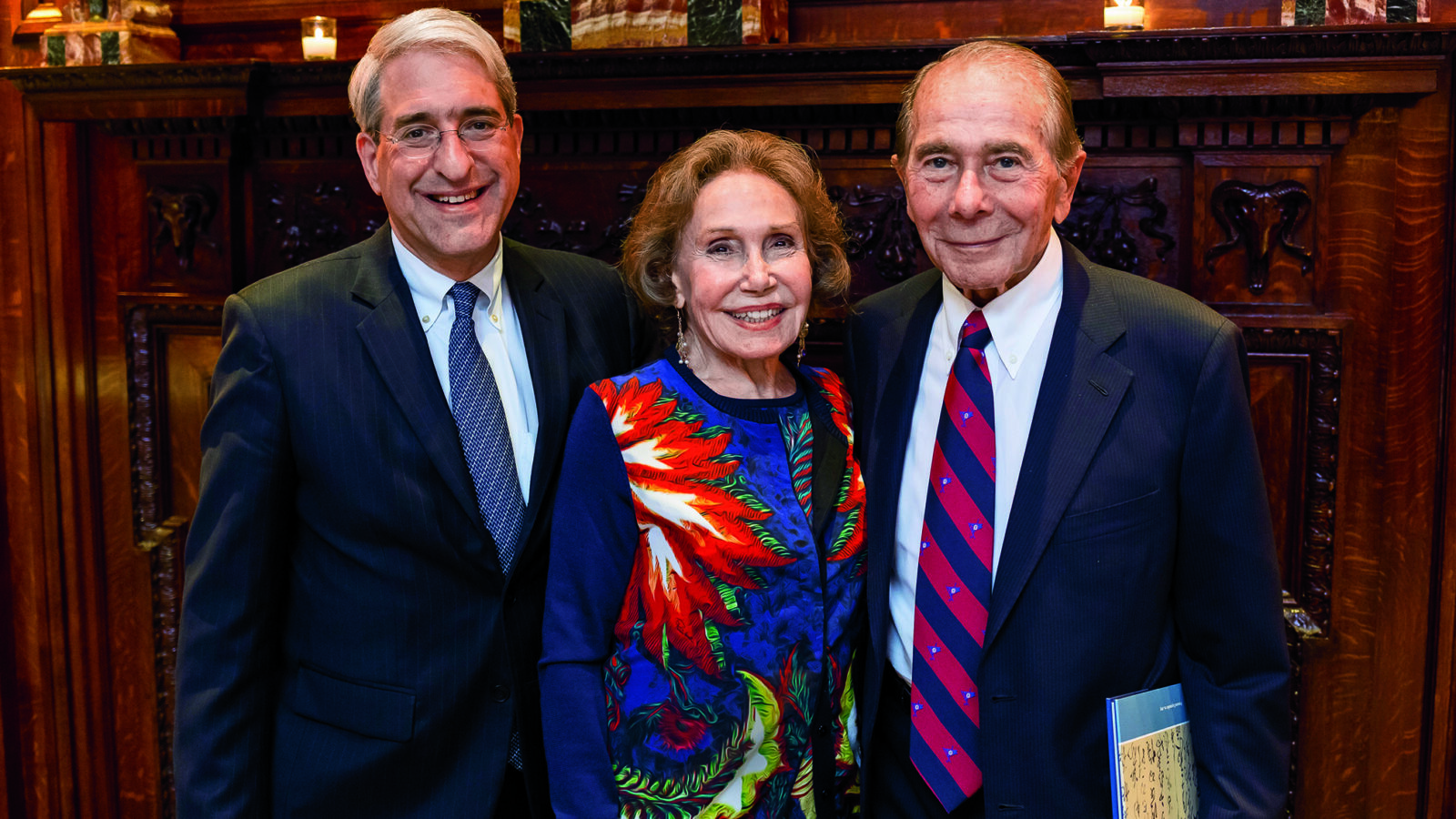 Yale University has received a generous $16 million contribution from The Starr Foundation, a private charitable foundation chaired by Maurice R. “Hank” Greenberg. In recognition of this gift, the university has renamed its signature leadership education initiative the Maurice R. Greenberg World Fellows Program. The Starr Foundation’s gift adds significantly to the program’s endowment, securing a permanent source of funding.

“We are deeply grateful for this wonderful contribution from The Starr Foundation,” said President Peter Salovey ’86 Ph.D. “Hank has been a tireless champion of the World Fellows program and its mission to build ties not only among nations, but among talented individuals from around the world. I am delighted that that this flagship program will bear his name now and for the generations to come.”

Greenberg and The Starr Foundation first contributed to the World Fellows in 2006 as part of a larger gift supporting Yale’s international initiatives. In 2010 they donated a further $15 million to the program’s operations and endowment.

“The World Fellows program has always interested me because it unites and educates some of the brightest minds of our age,” Greenberg said. “These will be tomorrow’s leaders in government, business, and academia, and they have a role to play in securing a world that is peaceful, just, and flourishing.”

Over two decades, Greenberg, his wife, Corinne, and The Starr Foundation have supported a range of international initiatives at Yale, with an emphasis on scholarship related to China. In total, their combined contributions now exceed $100 million. The Greenberg Scholars Program has sent more than 500 students to China in the past 10 years, and the Maurice R. Greenberg Conference Center is recognized as Yale’s premier venue for international gatherings and executive education programs.

The new Greenberg endowment supports a program that is already highly competitive. Each year, thousands of applicants apply for the program’s 16 positions, attracted by the opportunity to study at Yale, to interact with talented peers, and to expand their world view.

Once on campus, World Fellows participate in seminars, discussions, and research focused on critical global issues, such as economic development and business-government relations. They contribute to Yale’s intellectual life, collaborating with peers, auditing classes, and sharing their perspectives with students in Yale College and the graduate and professional schools. In the greater New Haven community, they volunteer with adult literacy programs and work with local schools and nonprofit organizations.

The Maurice R. Greenberg World Fellows Program will continue to follow this proven format. Program director Emma Sky, an expert in international politics, explained, “The World Fellows are committed to making the world a better place. They are dynamic practitioners, capable leaders, of extraordinary character, and committed to using their energy and talents to make a positive difference in the world. This new gift secures resources to support their work well into the future. We are hugely grateful for this contribution.”

A resource for Yale and the world

Since July 2015, the World Fellows program has operated as part of Yale’s Jackson Institute for Global Affairs. James Levinsohn, the Charles Goodyear Professor of Global Affairs and director of the Jackson Institute, also expressed his gratitude for the new endowment: “Our mission is to prepare Yale students for global leadership and service,” he said. “The Greenberg World Fellows personify this ideal, and they enrich the learning environment for undergraduates and master’s candidates alike.”

The 2015 cohort appeared as guests on podcasts and radio shows, published op-eds in major media outlets, and led more than 50 roundtable discussions, film screenings, workshops, and other events on campus. The rich array of topics drew from their own expertise and included climate change, healthcare system development, humanitarian implications of the war in Syria, Chinese trade and investment, India’s failures and challenges in the Maoist corridor, entrepreneurship, the Boko Haram uprising in Nigeria, and sustainable development in Africa, to name just a few.

Beyond Yale, alumni of the program are shaping world events. In the past year, 2015 World Fellow Pablo Bereciartua was appointed Argentina’s new national secretary for water resources, and 2012 fellow Paula Escobar, a Chilean journalist, was named to the BBC 100 Women List. Korea’s Daniel Shin, a 2013 fellow, and Tunisia’s Amira Yahyaoui, a 2014 fellow, were both selected as 2016 Young Global Leaders by the World Economic Forum. Yale officials noted that the ongoing work of these leaders — and the impact they will have in their own nations and around the globe — will be supported and influenced by the friendships they forged at Yale and their participation in the World Fellows network.